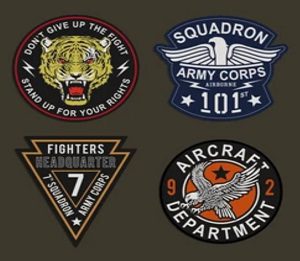 Patches have a backdated history when they considered glamorizing fashion but we are talking about recent history.

If you drive centuries back, the use of patches had been a sign of ‘poor’ who could not afford to have new clothes every once in a while.

Just one or two clothes are applied with hand-sewn patches to cover the holes.

Then in the 20th century, patches took a flight and had become the iconic fashion sign where the youth was seen wearing jackets, jeans, and whatnot having the designful patches.

The heightened use of the patches was also termed as ‘punk patch’.

And when the heat press machines were introduced in the market,

That gave the ultimate boost to the common people where they fell in love with what the machine is capable of and that they could bring in any design to press upon their wearables but how to heat press patches remain insolvent.

Back in the time, the folks were seen wearing hats, jeans, and jackets with patches on.

Still, there is no downtrend we are seeing with patches as they have been selling on Etsy, Amazon, eBay, and Walmart mainly in embroidered (machine-sewn) form.

What Types of Patches are Available in the Market

How to Heat Press Patches

Let’s take a t-shirt and visualize this whole process of heat pressing the patches.

The same procedure goes for heat pressing the patches over hats, jackets, denim, and all without much trouble.

Yes, a piece of pretty good news; you can remove the embroidered patches even if they were heat pressed.

Just the way it is pressed upon the t-shirt using the heat press machine, the same heat can peel it off.

Use a hairdryer and blow the heat for a while and directly on the patch to loosen it up.

There is still a demand for patches and being a printing business owner,

This needs to be properly marketed because the youth does not know the craze of patches.

And we claim these instructions are pretty straightforward unveiling how to heat press patches in the right way.

The embroidered patches are prone to excessive heat, so get to waste some of the patches in your training phase,

And then start offering this service.

Let’s become the sole source of reviving the old fashion in your town! 🙂